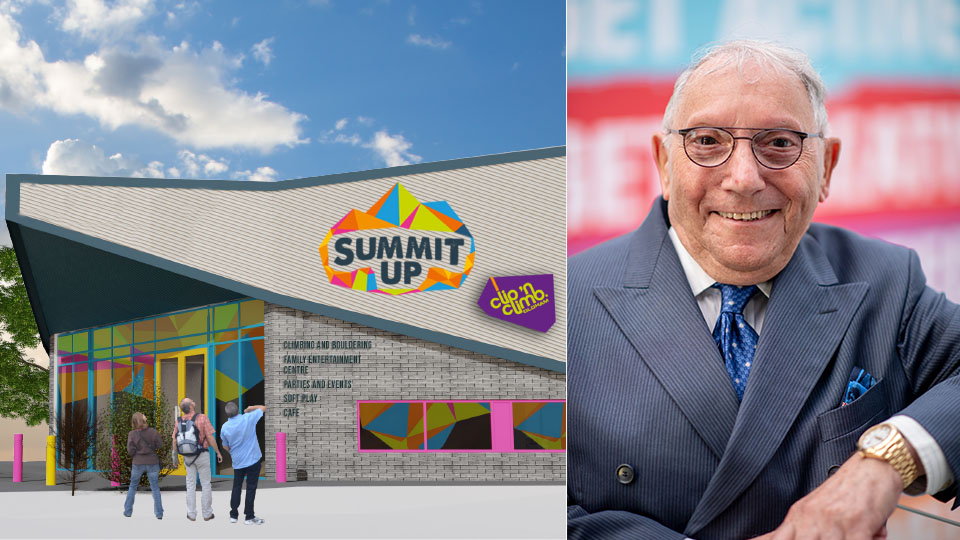 Excitement is building ahead of Summit Up Climbing coming to town….and the official opening is still some months away. Summit Up is an Olympic style indoor climbing and leisure centre in the heart of Oldham, set to attract up to 90,000 people to the town annually.

THE purpose-built climbing centre aims to provide a fun and safe space for the community to experience something new and push their limits, as well as simply offering an exciting new leisure activity for people in the area.

This stimulating new development – which is being built by the Stoller Charitable Trust – is now under construction on land on Egerton Street, adjacent to the hugely popular Mahdlo Youth Zone. Summit Up is expected to create around 40 jobs and all the profits made will be reinvested into the charity, for distribution to local youth charities.

Norman founded The Stoller Charitable Trust in the 1980s. He was honoured to become a Freeman of the Borough of Oldham in 2008 and Knighted in 2016 for his services to philanthropy and disadvantaged children, having donated millions of pounds to good causes.

Sir Norman told Business Edge: “Summit Up is being created with the community in mind. We want to create a space where everyone can feel safe to push their limits, try something new, bring the family and most importantly, have fun.

“While we are a ‘for-profit’ business, Summit Up is the trading subsidiary of ‘The Stoller Charitable Trust’, whose purpose has been to provide opportunities to raise aspirations, support Oldham’s young people to reach the height of their ability and to provide a helping hand when it is most needed.

“All of Summit Up’s profits will go directly to supporting the youth of Oldham. Our motivation in creating the Summit Up Climbing Centre is to leave a lasting legacy for the next generation of the Oldham community.

The Chairman of the Summit Up Board, Stephen Lowe DL FCIB, who is the Trust’s Project Manager, explained: “We strive for excellence and will feel proud if we succeed in creating an accessible and inclusive experience for all the family, from complete novices through seasoned climbers and even those just looking to try something new.

“We want to create a space that inspires and motivates all ages to be active and ambitious. It is our hope that Summit Up will connect the community and create a lasting social venue in Oldham.”

Designed by Entre-Prises UK, the sole supplier of climbing walls for the 2021 Olympic Games and the creators of Clip ‘n Climb, Summit Up will allow visitors to experience world-class walls as climbed by the world’s best competition climbers.

Climbing will be an Olympic sport this year, and the centre will have all three Olympic disciplines – lead climbing, bouldering and speed climbing. Summit Up will be the only centre in Greater Manchester with an official speed-climbing facility.

The tallest and biggest Clip ’n Climb in the North of England will feature 35 challenge including climb fan favourite challenges, the adrenalin pumping Leap of Faith, the signature Stairway to Heaven and a thrilling 10m vertical drop slide.

There will also be two ‘Valo-Climb’ walls that use ‘world’s first’ interactive gaming technology, designed to boost fitness and offer a challenging alternative to traditional climbing.

Children as young as two will be able to take part in special toddler sessions within a soft play area, and standard sessions will be available for all ages and abilities, making the unique climbing centre suitable and fun for families.

The centre will also have retail merchandise and a cafe.

A landmark project for Oldham

DESIGNED by Manchester-based AEW Architects, Summit Up Climbing is being built by Conlon Construction Ltd., of Preston. The building has been created as a split-level space comprising upper ground, mezzanine and lower ground floors, to complement the steep gradient of the site on the Oldham town centre site.

The internal space will also offer a soft play area, Valo Climb interactive climbing walls, a cafe and viewing areas, toilets, changing rooms and
staff amenities, with fit-out delivered by Entre-Prises, the company behind the Clip n Climb concept. Summit Up Climbing has secured the Oldham franchise of Clip n Climb. Entre-Prises has its UK office in Kelbrook, Lancashire, and has offices in Switzerland. France and The Netherlands.

External design of the futuristic building has been inspired by the Peak District and the appearance of local gritstone. The project is being overseen by consultancy Dooley Associates, also based in Manchester.

Darren Lee, commercial director at Conlon Construction, said: “This is a landmark project in Oldham – from the unique design features through to the fact that Summit Up will be run entirely for the benefit of local causes. We are proud to be playing a part.

“It also marks our continued growing footprint across Greater Manchester, having established our network in the city-region over recent years.

“Conlon is using its time in Oldham to prove the company’s capabilities in the leisure sector.”

PrevPreviousOldham Business Awards fund trip to the capital for Mahdlo
NextReputational damage can have costly implicationsNext
We use cookies on our website to give you the most relevant experience by remembering your preferences and repeat visits. By clicking “Accept”, you consent to the use of ALL the cookies.
Read MoreACCEPT
Privacy & Cookies Policy