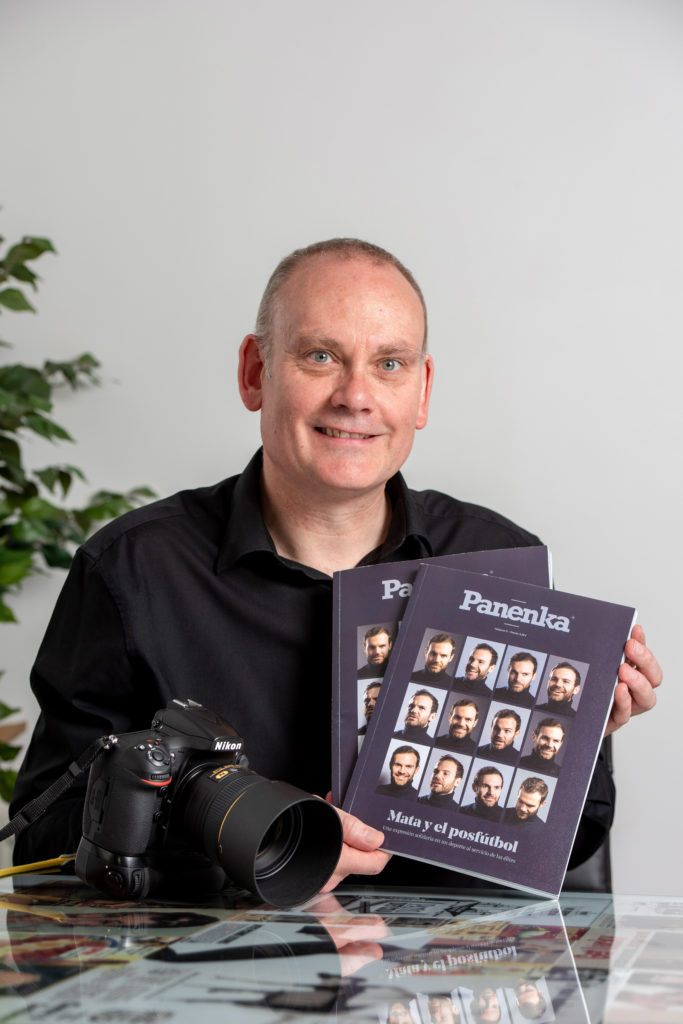 A magazine was so impressed with a set of photographs of Manchester United and Spain football star Juan Mata taken by Oldham photographer Darren Robinson that it used 12 portraits on its front cover.

Spanish-based football magazine Panenka typically features a single image on its front cover. However it did away with convention when it saw the portraits taken by Darren, a freelance award-winning photographer who covers business, news, sport and events.

Darren photographed Juan Mata for an interview with Spanish football journalist Javier Giraldo in a hotel near Manchester Airport. During the interview, Panenka magazine also handed Mata an award for his sporting achievements and charity work. Spanish international Mata is a Real Madrid graduate who played for Real Madrid Castilla, Valencia and Chelsea before joining Manchester United in 2014.

Darren said: “Juan Mata is renowned for being very accommodating and pleasant. This was the first time I’d met him and he was very helpful and professional. I set up my mobile studio in the hotel’s function area and had 20 minutes with him. “It was great that Panenka magazine were so happy with my photographs – and that it decided to use 12 on the front cover with more inside.

“Panenka is a very impressive magazine with quality content and design. It’s highly regarded in Spain, where football is like a religion. It is very influential among Spanish football supporters and the media. “Manchester is home to a number of Spanish football journalists. I was contacted about the Juan Mata photographs after journalist Pol Gustems, who works for Catalunya Radio and El Periodico newspaper, enquired with Oldham Athletic about Manchester photographers.

“Luke Ingram, the head of media at Oldham Athletic, passed my details to Pol. I then contacted the Panenka editor in chief, Carlos Martin Rio, in Barcelona for a briefing ahead of the interview. It was an interesting job and I really enjoyed it.”

PrevPreviousBanker joins Pearson as firm strengthens its commercial team
NextFirst Choice Homes employment support servicesNext
We use cookies on our website to give you the most relevant experience by remembering your preferences and repeat visits. By clicking “Accept”, you consent to the use of ALL the cookies.
Read MoreACCEPT
Privacy & Cookies Policy